Aftermath of tragedy in Uttarakhand has a grim tragedy to tell: Women toil hard to work, jobless men drink away their earnings. 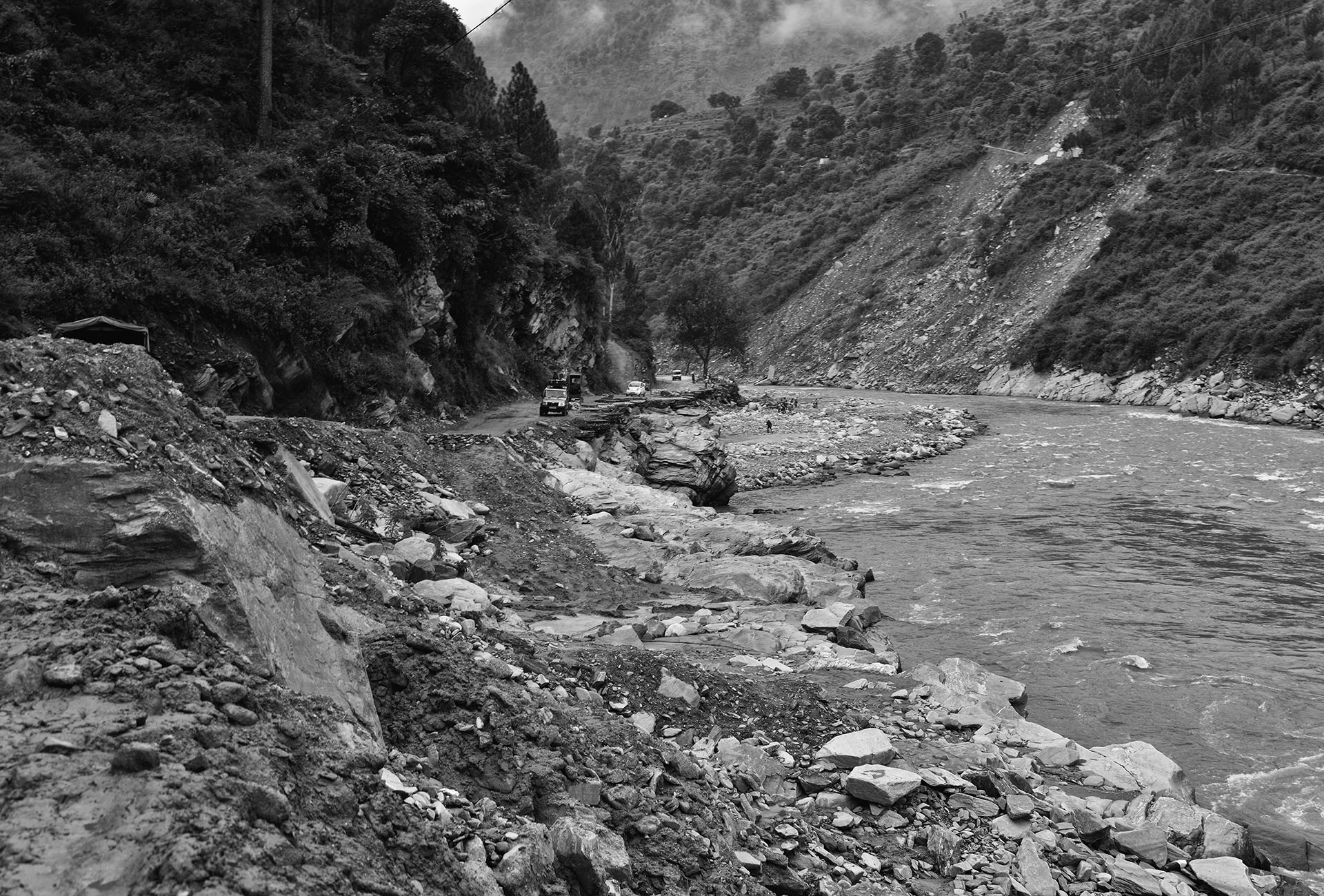 A group of volunteers from the Vishwagram Trust in Gujarat visited the rural areas close to Kedarnath, where a terrible cloud burst led to an unprecedented tragedy in June 2013. Tathya Macwan, who was part of the team, describes how life of the ordinary people has been adversely affected in the aftermath of the tragedy, whose intensity became worse because of illegal constructions along the road, in the valley.

Our journey started from Ahmedabad on October 24, 2013 with few people from the Vishwagram Trust, which is located in Mehsana, Gujarat. The Vishwagram Trust took the initiative to assist youths of Uttarakhand in getting jobs, either locally or outside. Those willing would be brought to Gujarat and trained in vocational programmes at the Dalit Shakti Kendra, located near Sanand town in Ahmedabad district.

These courses would include photography, computer (software and hardware), mobile repairing, tailoring, etc. Some qualified people would be offered direct job, too. A small survey carried out by the Vishwagram Trust during the trip revealed that more than 90 per cent of the youths in Uttarakhand were jobless. I was there as part of the team to photograph and observe the all-round destruction and loss of life the infamous cloud burst in mid-June. 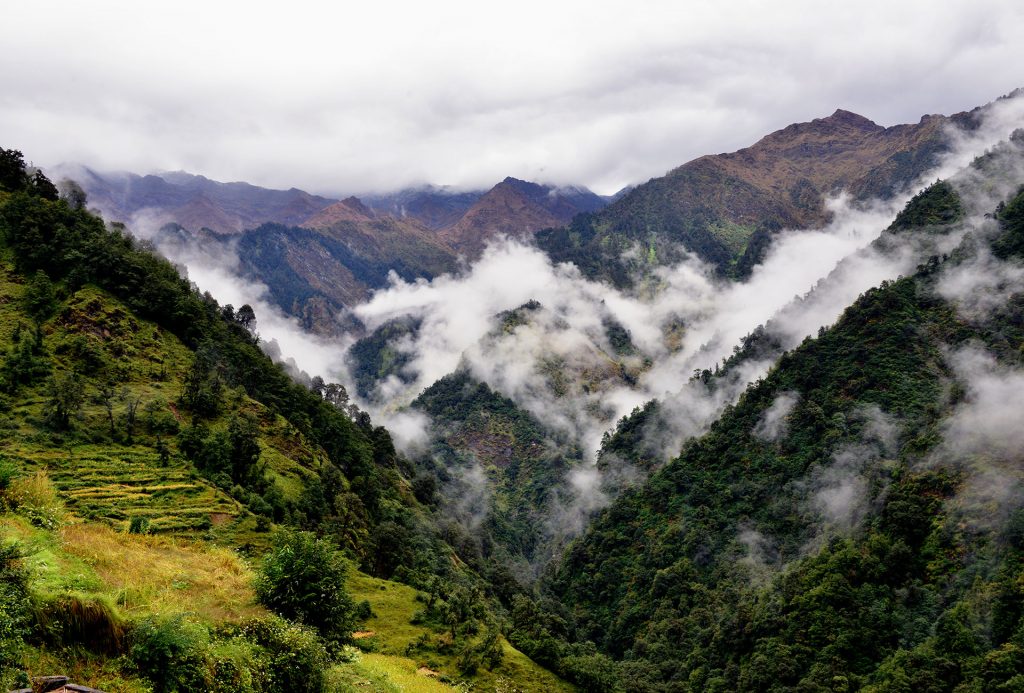 We halted for the night on October 26 at Atmanand’s place in Khumera village located on a high slope. Atmanand is a local businessman in Khumera, pecializing in preparing squash, jelly and juices from Malta. “Heavy rains which poured continuously for 4 days, took away everything we had”, he said when asked about the unprecedented cloud burst. It was a crackling noise that everyone heard at midnight of June 14, when the cloud burst started.

It was so scary, that people started running in any direction they could”, he said.

However, this was 30 km away from Kedarnath, where things actually happened. How scary it might have been up there! I wondered. Whatever destruction took place was within the first 24 hours of the cloud burst and subsequent melting of Chorabari glacier. The Uttarakhand government has been widely blamed for apathy, which led to the loss of innocent lives.

Atmanand’s factory was heavily damaged and the goods kept inside had gone useless. People living in his neighbourhood lost mules. The hotels they owned up in Kedarnath were destroyed.  He has also researched, in his own way, alternative ways of providing livelihood to people
like soap making, assembling solar lamps, making candles, etc. All these efforts were clearly
insufficient, considering the loss that had occurred.

Standing on the terrace of his house, one could see the ice-tipped mountains of the Shivalik range. The landscape there was indeed monumental. When the sun rose, I could see, it filled the entire landscape in golden colour. It was difficult to imagine how horrific things would go only four months back. The extremities were bewildering. The serene beauty of the outside world stood in sharp contrast to the grim faces of people inside their houses. 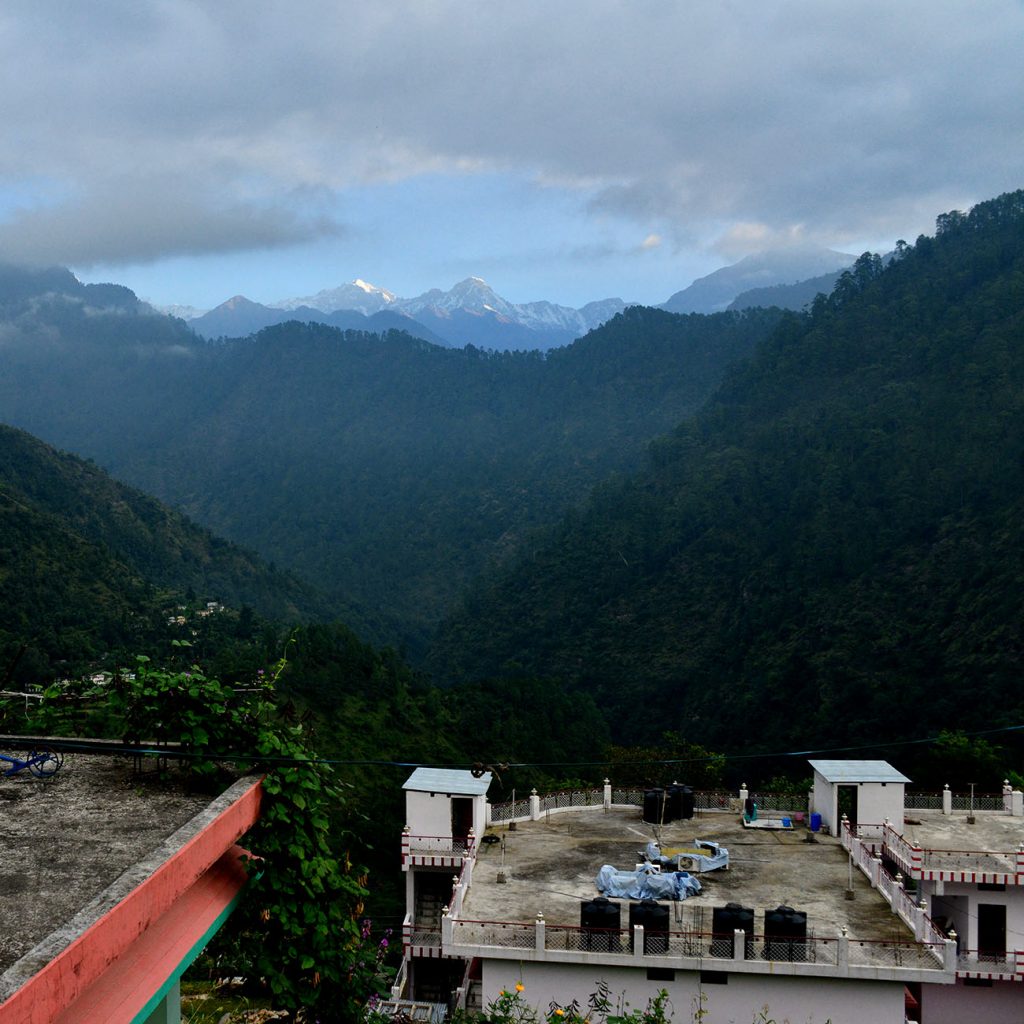 Next day we went to a village called Badasu, which is about 15 km from Khumera. This was going to be our home for the next seven days. The rooms were given generously by the locals, though we had carried our tents. Upon reaching the village, I saw two women carrying heavy load on their backs. They were carrying fodder for their cattle – those that have luckily survived. During interaction, the locals told me – that any work regarding family was done by women, cooking, washing clothes, farming, cattle grazing, or collecting fodder from faraway places.

The flood had left 90 per cent of the youth jobless…

Most of them had either mules, or were involved in taking pilgrims to Kedarnath. Some of them owned hotels and/or lodges. Other minor occupations they were involved in included running a small eatery, a tea stall or a provisional store. Despite such huge destruction, we were informed by the locals that the habit of going drunk had continued unabated. And, the drunken men would commonly beat up their wives.

The next day we went to a village called Triyuginarayan, which is famous for its temple, believed to be the place where Lord Ram got married to Sita. Our destination was Toshi village, which could only be reached on foot. It was a seven km long walk mostly on broken and slippery trek. We were all loaded with luggage, and heavy rains made it a very exhausting hike. It took us almost two-and-a-half hours to reach the village. This is the topmost village in the region, located at 7217.8 feet. We visited a family which had lost two young sons. “I had no option but to leave them and survive somehow to reach back to my home”, said Nagendra, the elder brother who had gone with the younger ones to Kedarnath. Nagendra is the only son in the family now, and he lives with his parents and two sisters, the younger one suffering from autism.

Pointing at a mountain lying between his home and Kedarnath, Nagendra said, “That’s the place where most of the pilgrims died. The mountain is a dense forest area and people tried for two days to get out, but finally gave it up. Hungry, exhausted, thirsty, cold and scared, they couldn’t stand the test of time”. Nagendra’s father operates a flour mill using mechanical energy generated from a waterfall nearby. There are about 30 families in the village who have lost someone or the other. 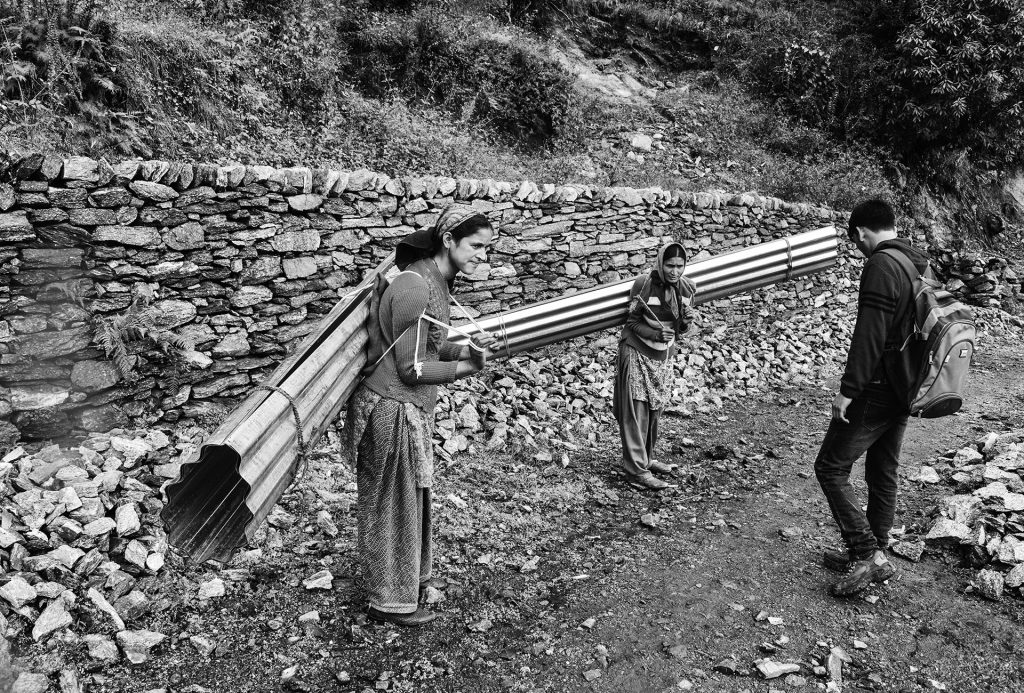 Returning from Toshi, I saw two women carrying large steel trusses for making roof. We were told they were paid minimum wages for carrying these trusses from Triyuginarayan to Toshi. They made only few rounds per day to hard earn their wages. This again testified about the state of women in Uttarakhand. Upon interviewing some teenage girls, I came to know that all of them had passed higher secondary school. They were all eager to go for advanced studies. Some were lucky, but most of them were forced to perform household chores and feed their parents and/or brothers.

Following the dance of death and destruction, the occupation that was now left with the youths was ferrying people to places in their jeeps. However, it was not an easy ride to make up there. We saw jeeps were filled with three times their capacity, unlike anything I have seen at any other place. Worse, the drivers were drunk most of the time. I was in a fatal situation on my trip from Ukhimath to Guptkashi. While reversing the jeep on the edge of the road, he almost killed us. I could see the stones rolling from under the tyre, and it was only a matter of seconds, and the jeep would have tumbled down the slope. Most of the roads upwards of Rudraprayag were damaged. There were places where you could not see the road, there was nothing but debris.

We encountered a horrific scene at Sonprayag, where two rivers, Songanga and Mandakini, merge. This place was the first to get flooded and damaged. I was shocked to hear that there was a 200 feet deep valley adjoining the hotels in Sonprayag. Looking at the place, one could hardly imagine there used to be a valley. The hotels were filled with sand, rocks and muck, and were buried one level into the ground. Some businessmen had no option but to clear the top floor manually and re-use it as hotel again. 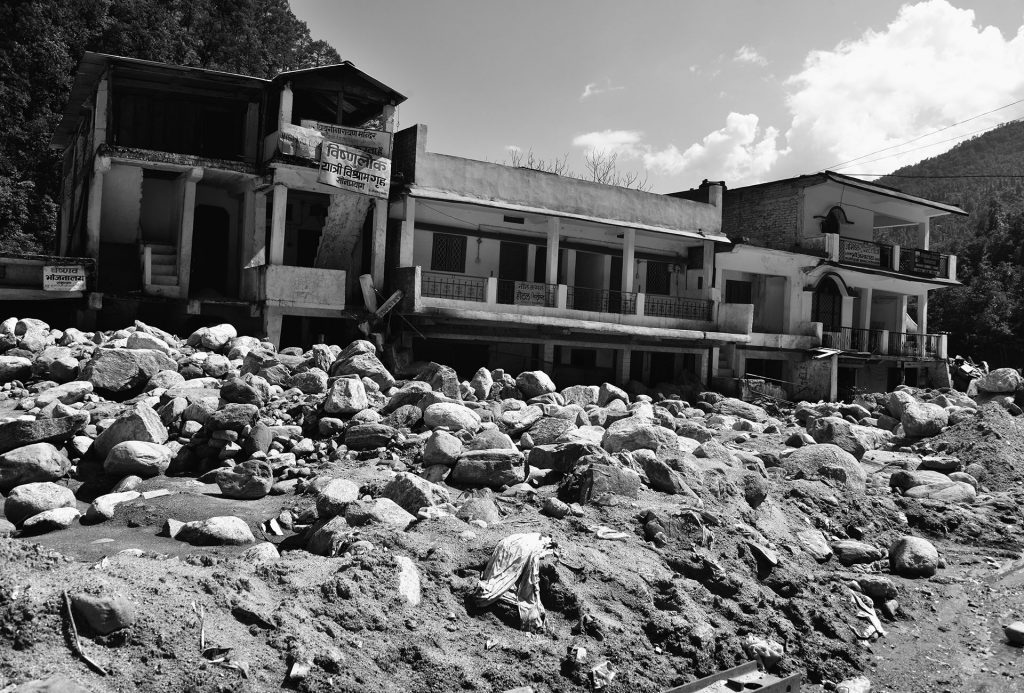 The road leading to Gaurikund and Kedarnath from Sonprayag was completely broken. The new trek was around seven km longer than the previous one and was not very reliable. Gaurikund used to be the last stop for the vehicle. Posters depicting lost people were pasted all over in Sonprayag, but to no avail. The place which used to be a central business hub serving tourists of all types had virtually gone barren.

The flood not only impacted business near Kedarnath, its effects had reached Delhi. Most of the material to serve the tourists would come from Delhi – food, accessories, everything. With no tourists, the flow had just stopped. The sadhus and sadhvis of Rishikesh and Haridwar were no exception to this. Their ashrams used to be filled with guests intending to make the Char Dham yatra. With the dhams losing their glory, the ashrams were in a poor state.

Later he revealed that helicopters used to ferry meat and liquor for pujaris at Kedarnath on a daily basis. He wanted me to believe that whatever happened was a reaction from nature to this type of impure activity by pujaris. I didn’t believe him. Yet, I wondered, will Uttarakhand retain its past glory? Will the state government stop approving illegal constructions, which led to the loss of so many lives? Only gods should know… 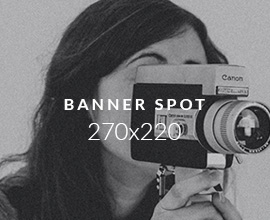